The inde horror game “Five Nights At Freddy’s” is a popular game based on haunted possessed killer pizzaria mascots. These addon packs brings the haunted animatronics to your minecraft worlds with some decorations as well! This Page is a seperation of multiple different five nights at freddys addon packs for you to choose from and download any you would like. These animatronics are waiting to join your world and give u a scare and suprises!

The animatronics in these addons are very big and fast and will relentlessly attack you if they sport you in survival!

The fnaf 1 pack features the main antagonists of the five nights at freddys series freddy, bonnie, chica, and foxy. It Also includes extra animatronics golden freddy and endo 1. U can use pose them by taming them into showtime forms. 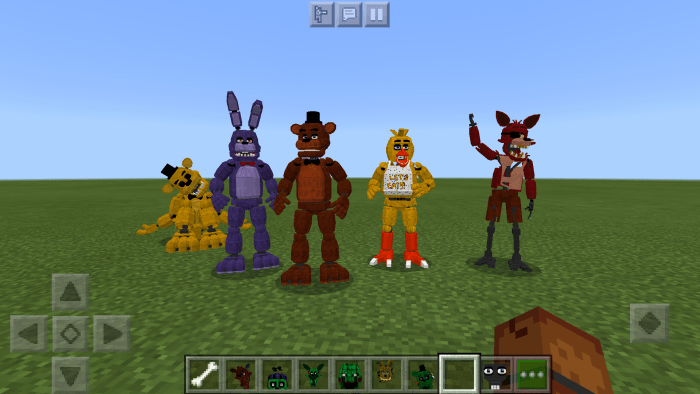 The five nights at freddys 2 pack includes more characters from the second game which is a prequel to the first. Theyre are new cleaner animatronics and the old withered animatronics. 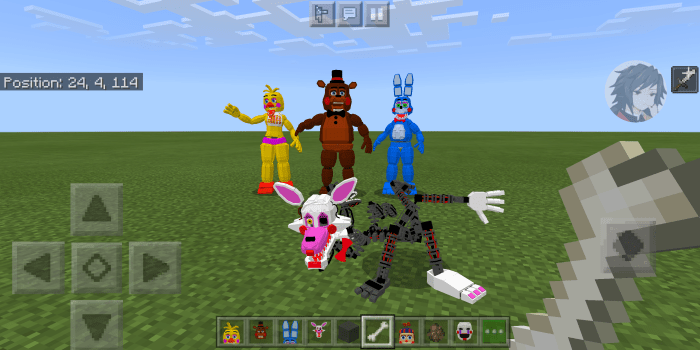 The toy animatronics are the new improved animatronics for freddy fazbear entertainment. They have showtime performances when tamed and sat down like the fnaf 1 pack except mangle, she will do a pose instead. 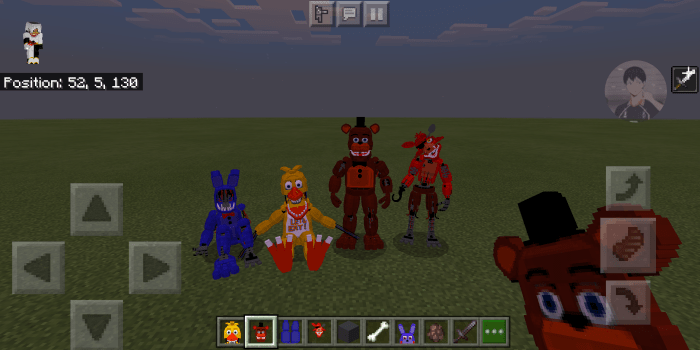 The withered animatronics are the broken down versions of the original animatronics from fredbears family dinner. They are much bigger than the toys and are much more vicious and aggressive. they instead of having showtime animations when tamed, they have poses instead.

Above are the extra characters from the fnaf 2 addon, they are much more mysterious or important to the fnaf lore in the games. They can be posed as well as the withereds. 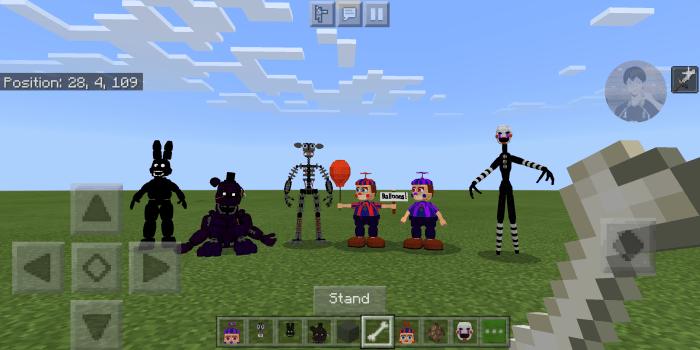 When u kill puppet and or golden freddy, i can spawn fredbear from U.C.N 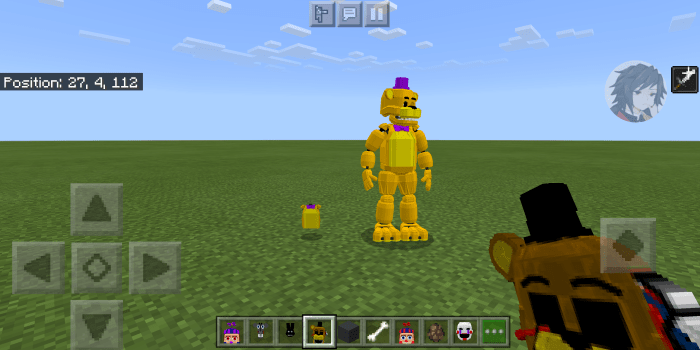 The fnaf 3 pack brings back old characters from the past as phantoms or hallucinations, including a new animatronic named springtrap. This animatronic is mysterious and very important to the fnaf lore, in this addon they will hunt u down in ur world with the help of his phantoms. U can tame them as well and pose them in your world. 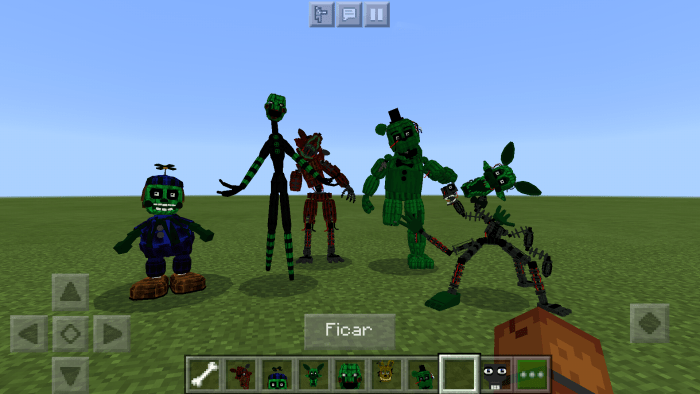 The fnaf 4 addon is probably the scariest on this list of addons! New giant demonic versions of the main animatronics, including some new decorations!

The nightmare animatronics and tall dangerous animatronics with rows if sharp teeth and sharp claws, they are mysterious but deadly and fast. They will have no mercy on you! Like the previous addons you can pose them as well! 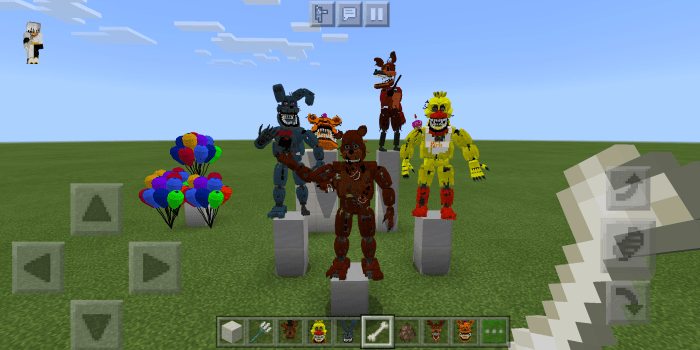 You can also get new decorations to decorate your house or a map! 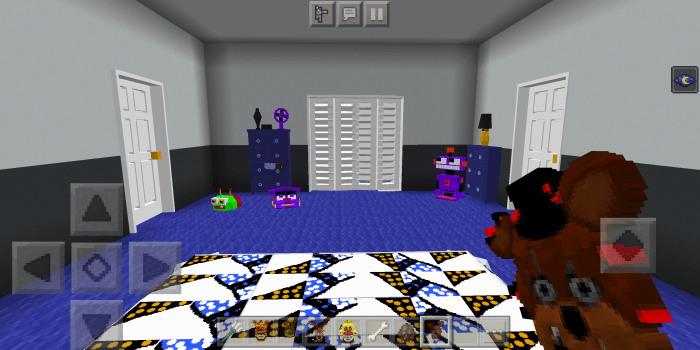 The sister location pack has a new list of animatronics. These circus animatronics have been experimented on and the innocent souos within are very angry! These animatronics what your skin and flesh to wear you as a living suit, dont let them get you!

You can also get new decorations and have secret animatronics including broken animatronic versions of the funtimes! 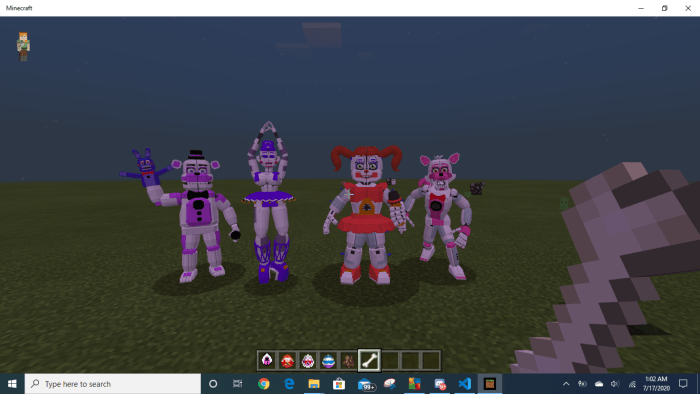 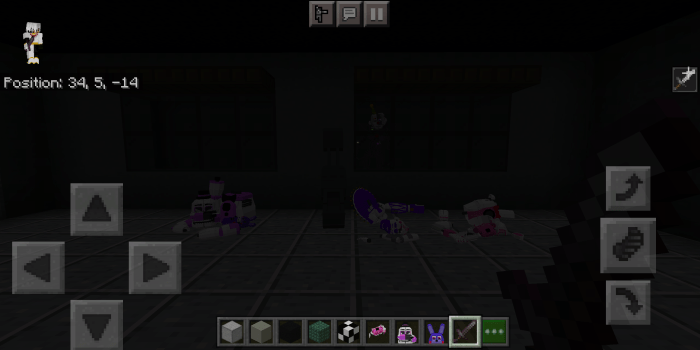 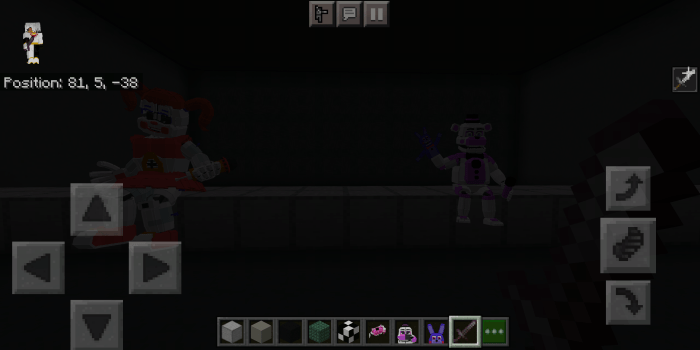 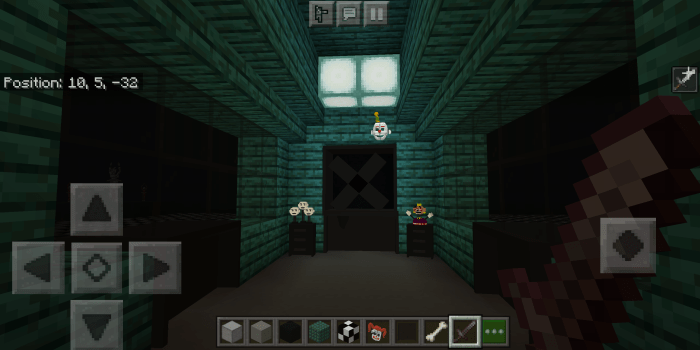 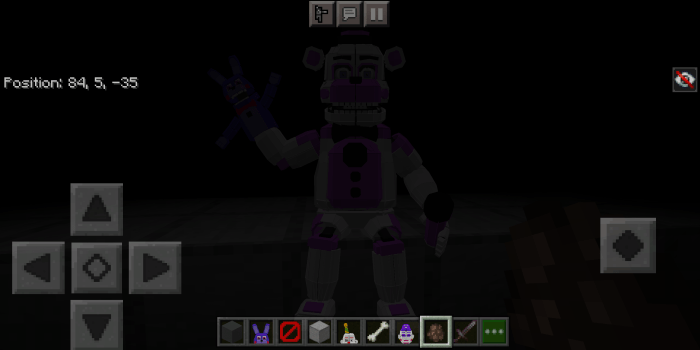 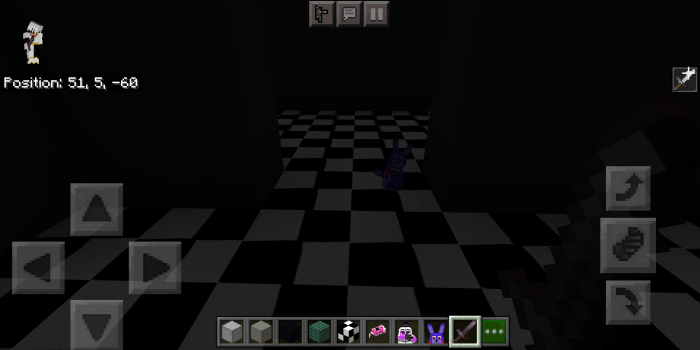 Currently right now to tame them you must use a bone to tame animatronics, in the future versions you will have a wrench to tame them and sit and pose them

Introducing circle shaping into minecraft and how?!:

You might be wondering How i made tge animatronics and accessories shaped without being so blocky? Well I use a program called “BlockBench” which is my opinion probably the best modeling program for mc I have seen so far. U can rotate a cube and using other cubes together to form shapes. That was a easy trick and i recommend other addoners to use the app Blockbench to make great models for your addons, you can watch tutorials on my channel from the past to learn how to make models!

How To Get Blocks

The only pack with addons currently is the fnaf 2 addon, but to get them you must type the command /give @s adam:(block name)

In the future there will be more fnaf packs available soon, these are all the current addons for now.

If you want to do reviews or make maps etc on this addon, u must credit me and my youtube channel AdamTaylor Gaming.

To install the addons, click the download pack links and it will take you to mediafire without any adds. Once U get there download the mcaddon or mcpack and import it to your mc and you are finished! 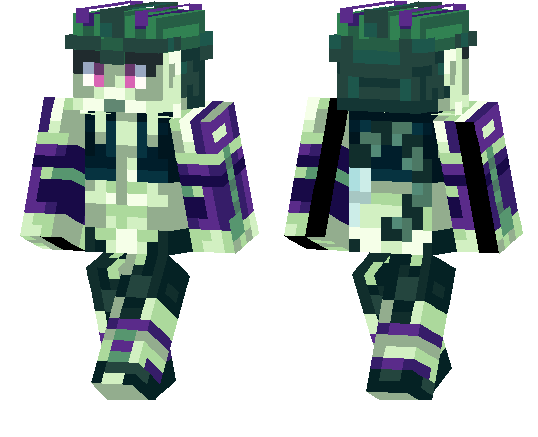 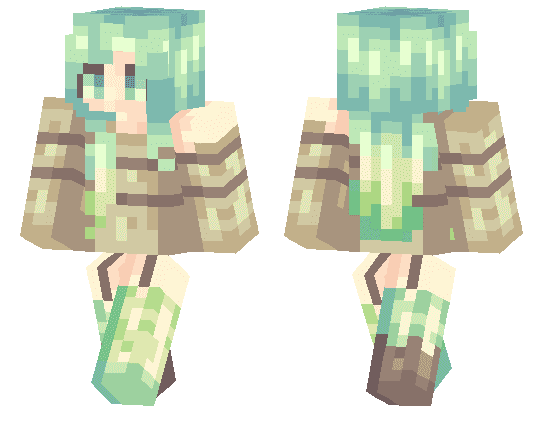