As its title, this Add-on buffed Minecraft’s Iron Golem, it adds several features to the golem, from its model down to its capabilities. New animations, various attacks, special armor and weapon, obtainable and craftable items and etc. And the best part of this Add-on, you could tame, ride, and fight alongside with this buffed golem. This Add-on is for Minecraft BETA 1.16+, and may also work on the game’s previous versions.

How to get Buffed Iron Golem?

-In creative mode, you can easily spawn a tameable B.I.G. by using its own spawn egg, as usual you can find it in the nature tab where other spawn eggs are located.

-While in survival mode, as B.I.G. does not spawn naturally, the only way you can get B.I.G. is by splashing an Iron Golem with Strength Potion of any duration, and then you can now give a Poppy Buff on it (right click if you’re on PC and long press you’re playing the mobile version of the game), after offering, the transformation will begin, wait for 10 seconds and the default Iron Golem will turn into Boss Buffed Iron Golem and obviously has a Boss name Displayed on the screen, you need to defeat this boss for it to become tameable, the same B.I.G. you can get in creative mode as mentioned above, after defeating, it will offer you a Poppy Buff, and after getting, it will stand and the given item can now be used to tame the Golem.

After defeating, it’ll give you a Poppy Buff

You can now tame it with Poppy Buff

-You can also summon B.I.G. through command neither you’re in creative or in survival (if cheats are allowed) mode.

-It is a custom entity and no default mob was replace in this Add-on.

-Has a custom spawn egg
-Can be summoned by a command
-Buffed model
-200Hp
-When attacking, suddenly deals 11 damage before performing its ground pound attack and also inflicts slowness to its target for 5 seconds.
-Has 3 types of attack:
Ground Pound –Smashes the ground knocking backs nearby entities dealing 11 dmg. and inflicts weakness for 10 seconds,

Iron Spike Summon -Summons iron spike in either circle or line shape and dealing 6 dmg. per tick and inflicts slowness on contact for 10 seconds),

and Iron Block Throw -Obviously throws iron block at its target that deals 11 dmg. and inflicts blindness on hit for 10 seconds)

-Vines all over its body will vanished and its eyes turns brown
-it’ll have 350hp
-Can be ridden but cannot be controlled until you put its custom saddle
-Can be healed with Iron Soul (50hp) and Poppy Buff (250hp)
-Follows you around
-Attacks any entity its owner attacked and any mob that hurts its owner
-Can sit and stand like a Wolf (on mobile, sneak in order for the “sit” and“stand” text button appear and while on PC just sneak and right click on the Golem)
-And can be saddled, chested, and attached with armor:
It can be saddled with the new custom item “Iron Golem Saddle Throne” by putting this item on the Golem’s saddle slot, once saddled it can now be controlled when ridden and also can do a power jump like a Horse but can jump drastically higher, about 4 to 5 times higher.

Similar to a Llama, right click a chest on the golem while on PC or long press the chest on the Golem on Mobile, and after that, the Golem can now be stored with your or any items having 12 item slots.

Put the “Iron Golem Body Spike” on its armor slot similar to a Horse, the Golem will now then have a massive 1,500hp, note that attaching this armor on the Golem while it’s injured or not on its full default health will only grant a maximum 1,500hp and retain its current health meaning its best to put the armor while the golem is in its full health or undamaged, for example, if its armored while having a 349/350hp the golem will have a 349/1,500hp and needed to be healed with Iron Soul or Poppy Buff, otherwise putting the armor with its full default health 350/350hp the golem will also have a full 1,500/1,500 health immediately.

Chested, Saddled and Attached with Armor

Boss Buffed Iron Golem’s Features (it also has the same abilities as the normal B.I.G. excluding:)

Items and other Stuffs

All of the following Custom items, weapon and armor are obtainable from the creative inventory in the Nature Tab, hold that item corresponding to the item you want to get and tapping or clicking it anywhere will immediately grant you the item.

Get the custom item you want

Once done, you’ll get the specific custom item

-Always drop by an Iron Golem and its buffed version on death.

-Can be crafted with other items to obtain most of the Add-on’s items, accessories, weapon and armor.

-Crafted with 1 Poppy and 4 Iron Souls
-Buffed version of Poppy Flower which can be offered to an Iron Golem making it a Boss Buffed Iron Golem, and will return back to you after defeating this Boss Golem.
-and as mentioned above this is the flower and the only item used to tame the Buffed Iron Golem.

-Crafted with 1 Iron Soul and 4 Iron Blocks
-This is an armor attachment for the Buffed Iron Golem.

-drop by Boss Buffed Iron Golem if it’s killed by the player or of its pet while performing its Ground Pound Attack.

-1 of the four items you needed to craft the “Riemer”.

-Drop by Boss Buffed Iron Golem if it’s killed by the player or of its pet while performing its Iron Spike Summon Attack.
-1 of the four items you needed to craft the “Riemer”.

-Drop by Boss Buffed Iron Golem if it’s killed by the player or of its pet while performing its Iron Block Throw Attack.

-1 of the four items you needed to craft the “Riemer”.

-It has the same durability as the Netherite Sword and only losses its durability when doing basic attacks with this weapon (Ground Pound, Iron Spike Summon and Iron Block Throw does not affect its durability, therefore it has an infinite usage when performing those 3 types of attacks as long as you’re holding Riemer either it’s broken or not).

-simply hold Riemer and attack any entity or tap it anywhere or on any block will activate Ground Pound immediately knocking back nearby entities around you inflicting weakness effect for 10 seconds.

–again just hold Riemer, Sneak, and then attack or tap it anywhere will immediately summon 10 Iron spike in line in front of you damages entities on contact with the spike of 4 dmg. per tick inflicting weakness effect for 10 seconds.

–hold it and right click for PC and long press on mobile and an Iron Block will be threw out of you, it’ll inflict blindness effect on the target you hit for 10 seconds.

-Once Equipped (while holding Riegale, right click it on PC or long press the item on Mobile), you’ll have 50 health, no fall damage, knockback resistance, fire immunity and also 50% lesser lava damage.

-It has an infinite usage

-You can unequipped Riegale the same way removing a normal armor.

-If you leave Boss or Non-Boss B.I.G. it will defend and behave as a normal Iron Golem.

-Tamed B.I.G. can’t hurt other tamed mobs in the game (Cat, Donkey, Horse, Llama, Mule, Ocelot, Parrot, Skeleton Horse, and Wolf) by any means of its 3 attack types. But can hurt any entity its owner attacks with its basic attack (its attack that is mentioned above and is the one being taken before performing the pound attack).
-Tamed B.I.G. is invincible while it’s sitting
-Iron Golem now always drop 1 Iron Soul on death.
-B.I.G. drops a guaranteed 1 Iron Soul, 1-3 Poppy and 5-7 Iron Ingot
-Iron Golem created by the player will now be hostile when provoked (in order to have a thrill when trying to loot the iron soul)
-Boss B.I.G. drops loot varies on its state, if it’s performing a Ground Pound attack, it’ll drop a “Shock Orb”, If its Summoning Iron Spike, it’ll drop “Iron Spike Shard” and if you kill the golem while it’s throwing an Iron Block, it’ll drop a “Stacked Iron Blocks”, this are the 3 of the 4 items you needed to craft the “Riemer”.
-Boss B.I.G. only drops its loots when killed by the player or of its pet.
-B.I.G. doesn’t attack creeper like Wolf and normal Iron Golem.
-While B.I.G. is sitting it is invincible and also stop attacking any monster or any entity you attack.
-The Add-on has a glitch where tamed Buffed Iron Golem in some Biome or Places in the game suddenly dies for some unknown reasons which affects its Death Animation, for that reason I made another version of the Add-on’s behaviour file with no Death Animation in order to temporarily fix the issue where Buffed Iron Golem dies randomly, I still put a download link for the behaviour file with Death animation for those who still wanted to see its Death Animation (though it has same death animation with Boss Buffed Iron Golem-which has no glitch in its death animation), for a stability download the one with no Death Animation.
-I am not supposed to be creating an armor or a weapon within this Add-on, so I ended up creating another packs for those.

Post this Add-on where you want and or make a video showcase about this IDC but please just put the link of this page from mcpedl at least and don’t create and distribute your own download or mediafire link.

IF I’VE MISSED SOMETHING, ASK AND COMMENT DOWN BELOW

1. After downloading, go and individually click the behavior and resource “.mcpack” file opening the game.

2. Once successfully imported, create your new world and activate both the resource and behavior pack. 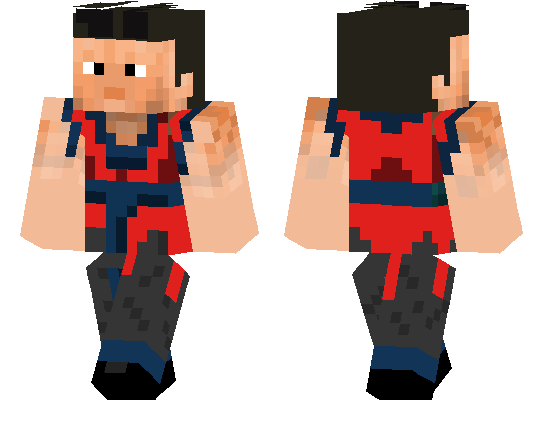